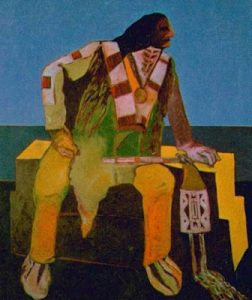 Several hundred patrons crowded the main exhibition space at the Denver Art Museum in March of 1979 when WESTAF lobbed its “visual challenge” to the art world. The First Biennial Exhibition, featuring 28 western artists, boldly staked a claim to a role in the dynamism roiling the arts ­in the 1970s — where plastic and assemblage took their place next to oil painting and stone sculptures.

These WESTAF Biennial “art pioneers challenge and delight” as they “move toward the future of contemporary art,” the small invitation for the event declared.

The exhibition required significant support from public and private sources, from the National Endowment for the Arts, to the Dayton Hudson Foundation, Mission Viejo Co., and Phillip Morris Inc. The latter also supplied funding for a 25-minute film, New Art of the American West, introducing the artists and their work.

The cover of the invitation, and a four-color poster, featured work by Fritz Scholder, a New Mexico artist whose revolutionary paintings beginning in the 1960s shattered stereotypes and “forever changed the concept of ‘Indian artist’”[1]. “Paradox,” he says in the film that accompanied the exhibition, was his favorite word. He toppled “the loaded national cliché and guilt of the dominant culture,”[2] ­painting “real Indians” enjoying ice cream or as warriors carrying American flags in bold swathes of unexpected color and texture. Posters of Deco Indian were sold at the four museums that hosted the exhibition for $10 unsigned or $50 for the limited edition of 250 signed. 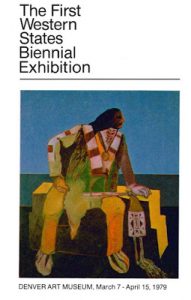 The Biennials continued until 1988, with three national tours. However, the realities of mounting such an ambitious tour every two years, combined with high operating costs and difficulty locating venues, led to the program’s demise by the end of the decade. 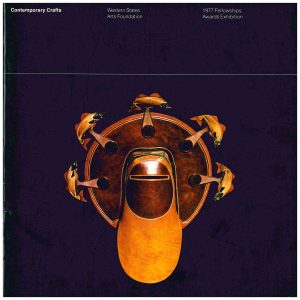 1]Fritz Scholder Official Web site. http://www.fritzscholder.com/. Scholder was one-quarter Luseino, a California Mission tribe and an instructor from 1964-1969 at the newly formed Institute of American Indian Arts in Santa Fe.