ART JOB: One of a Kind

ArtJob, one of WESTAF’s most visible and successful earned-income projects, began in 1977 as “JobBank,” a back-of-the-book listing published in Emphasis, the Western States Arts Foundation’s monthly member newsletter (Emphasis is available in Series 6 in the WESTAF Archive). It proved a popular feature, and when Emphasis folded in 1981, JobBank morphed into the National Arts JobBank, a freestanding subscription-based listing resource published by WSAF serving the eight existing regional arts organizations.[1]

WSAF’s plan positioned JobBank as the clearinghouse for careers in the arts, a one-stop-shop for a modest subscription fee for job seekers of $15 for six months or 12 issues. Within two years, it boasted a subscription base of 2,300. It offered job seekers “one central source to turn to rather than a multitude of newsletters, bulletins, and referral services at high subscription rates,” said Jerry Yoshitomi, WSAF’s vice president of operations from 1979-1981.[2]

In 1993, the newsletter shifted once again, becoming ArtJob, and for the next 19 years — longer than any similar publication — it functioned as both a nationwide listing service for jobseekers and employers in any arts discipline and a timely resource for arts administrators[3]. Santa Fe-based Joseph and Annie Tornick produced the bi-weekly publication, providing marketing, customer service, distribution and administration. 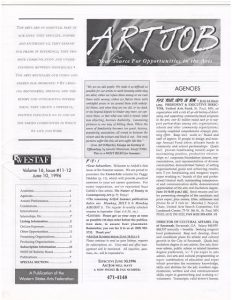 Producing a print publication was expensive, and by the mid 1990s WESTAF began looking for ways to contain costs while boosting subscriptions. Most received ArtJob via first-class mail; however, by 1997 a small but growing number subscribed via email.[4] The push into the new technology became inevitable, and by FY1998, ArtJob had its own interactive Web site, www.artjob.org. Online subscriber rates initially tracked print prices — three months, $25; six months, $40; one year, $75 — until the print edition ceased publication in December 1999, and ArtJob became an online-only service.

In 2015, ArtJob succumbed to competition for online job listings, which, coupled with rising administrative costs, diminished its capacity as an income earner. Its legacy remains, however, in WESTAF’s many earned-income services, from CaFÉ™ to ZAPP™.